Welcome to the 1982 Topps Blog.  Let's get this show started. 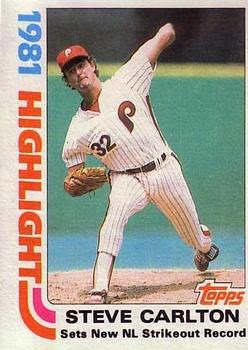 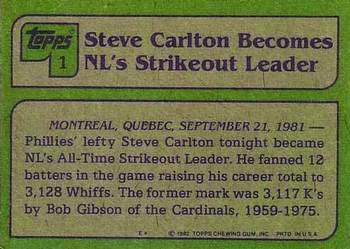 Who Can It Be Now?
The Men At Work song introduces Steve Carlton, who set a record in 1981 for the most strikeouts by a pitcher in the National League, passing the immortal Bob Gibson.  With interleague play since 1997, my question is whether these league-specific records still exist and are still kept.  Even in 1982, highlighting a league-specific record seemed a bit dubious.

That said, it almost looks like Carlton's left arm has been amputated at the elbow in this photo.

Trivial Pursuit
This category is named in honor of the fact that one of 1982's most requested Christmas presents was a copy of Trivial Pursuit:

Steve Carlton was bilked out of most of the money he earned prior to 1983 by his unscrupulous agent, David Landfield.  Landfield put Carlton on an "allowance" during Carlton's time in the major leagues and, in the end, embezzled most of the money.  This led Carlton to sue Landfield in 1983 in Federal Court in Philadelphia.

Totally Gnarly
Totally Gnarly will celebrate the weird and strange things that come up when researching and is named this in honor of the introduction by Frank and Moon Unit Zappa of "Valspeak" in 1982.

If you are a conspiracy theorist, then Steve Carlton should be your favorite baseball player.  The linked article is from the April 1994 issue of Philadelphia Magazine and appears on the internet at the Deadspin Stacks.  The follow-up from author Pat Jordan provides the most interesting and illuminating paragraphs:


Carlton was odd. He told me, "I'm up here because I wanted to be secluded because of what America's becoming," or something like that. So I changed the subject and told him about a new gun I had bought. I'm into guns. For some reason, I knew that would perk him up. So I mentioned that I had gotten a Czechoslovakian military pistol, a CZ 85.

He said: "Oh yeah, that's a great gun. You know you'd better bury that in PVC pipes because the UN is coming in black helicopters to confiscate all of our guns."

He said, "Yeah, it's a world organization that's dictated by the Elders of Zion, the twelve Jews in Switzerland who control the world."

On that note, let's just get up slowly and walk backwards away from the keyboard....


A Few Minutes with Tony L.
As "60 Minutes" was the top rated show in America that wasn't named "Dallas", we'll close each discussion with my Andy-Rooney-like thoughts about what I can recall thinking about each player in 1982, if anything, and where my opinions are today.

Because Carlton was in the National League, I didn't give much thought to Carlton other than recognizing him as a great pitcher.  Everything I read about him brought up his amazing 1972 season with the Phillies and, then, the fact that he stopped talking to the press at some point in 1973.  Due to the trade from the Cardinals to the Phillies, I forever associated Rick Wise with Steve Carlton.

I recall reading, though, that he never responded to his fan mail, so to 10-year-old Tony, that made Carlton a bad guy despite being a really incredible pitcher.
Posted by Tony L. at 6:30 PM