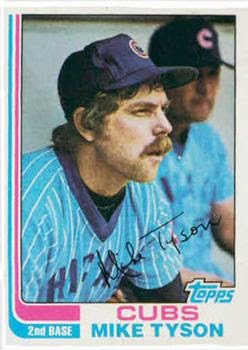 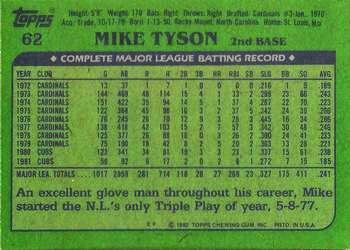 Who Can It Be Now?
Michael Ray Tyson, who is most definitely not Michael Gerard Tyson, was born on January 13, 1950, in Rocky Mount, North Carolina.  He graduated from Northern Nash High School in Rocky Mount.  That high school was opened in 1966 as the consolidation of four different Rocky Mount high schools and, as a result, was one of the first integrated high schools in the area.

It does not appear that Tyson was drafted directly out of high school.  As a result, Tyson attended Indian River Community College in Fort Pierce, Florida.  He eventually attracted some attention from scouts and was drafted in the third round of the 1970 January Regular Draft by the St. Louis Cardinals.

He signed with the Cardinals and spent his first year as a pro in St. Petersburg, Florida in the Single-A Florida State League.  His first season was nothing special offensively -- .245/.302/.315 -- and, to top it off, he committed 35 errors in 109 games in St. Pete -- 32 at shortstop in 104 games and 3 in 4 games at second base.  In 1971, he moved to the California League with Modesto and, frankly, did no better at the plate and slightly better in the field.

Apparently, though, his 1971 numbers were good enough to convince the Cardinals that he should skip Double-A and move directly to Triple-A Tulsa in 1972.  He performed about the same in Tulsa as in Modesto and St. Petersburg -- .232/.299/.297, 3 HR, 2 SB.  His defensive abilities at second base improved significantly, however, such that he committed only 11 errors in 633 chances -- a .983 Fld%.

Tyson's "emergence" in Tulsa in 1972 apparently was sufficient to convince the Cardinals to trade their incumbent shortstop, Dal Maxvill, to Oakland on August 30, 1972.  To be fair, the Cardinals in the early 1970s appear to subscribe to the theory that it was okay to be a "good-field, no-hit" shortstop -- Maxvill hit just .221/.299/.261 in 105 games before his trade.

And, yes, I said shortstop.  After Tyson's brief debut in 1972, the Cardinals moved Tyson to shortstop for 128 of his 144 games in 1973.  His hitting still was anemic -- an OPS of .577, which put him squarely at an OPS+ of 60 -- and he led the National League in errors committed at shortstop with 33.  At the same time, though, he led the National League in double plays turned at shortstop with 108, so it was not a completely lost cause.

Tyson continued to receive regular playing time at shortstop through 1975 and then at second base from 1976 to 1978.  By 1979, however, the Cardinals had started to assemble a team of guys who could hit and field their position.  Tyson was supplanted by the matching 23-year-olds at second base of Ken Oberkfell and Garry Templeton -- each of which hit over .300 (though Templeton walked so infrequently as to give him a .331 OBP to go with a .314 AVG).  Oberkfell's chance to play came because Tyson was injured, and as a result, Tyson became surplus to requirements in St. Louis.

Tyson lasted just one season as the main starter at second base.  The Cubs called up Pat Tabler for his first major-league action in 1981; Tabler started 31 games at second to Tyson's 23, though neither hit at all.  Since Tabler was younger and gave a better opportunity to the Cubs to have growth come about, Tyson was pushed aside.

And by pushed aside, I mean that Dallas Green came to town at the end of the 1981 season. He was named the Cubs General Manager on the heels of his role as the Phillies manager for their World Series Championship in 1980.  When he took over, he said that the Cubs organization was "a shambles."  As this Chicago Sun-Times article reprinted in the Montreal Gazette in 1984 noted, one of Green's first official acts as GM was to pay off Mike Tyson.

Tyson never played in the majors or minor leagues again.

Nanu Nanu
This card was Mike Tyson's last Topps card.  If you go to Trading Card Database for Tyson, however, they have conflated this Tyson with the boxing felon.  Oops.

Don't You Want Me?
Tyson never played baseball again as far as I can find.  It's nearly impossible to find much about this Mike Tyson thanks to the boxer being such a prominent sports figure over the past thirty years, though.

Family Ties
Mike's son Torre Ray Tyson has played, coached, and managed in the minor leagues and is currently serving as a coach for the Frederick Keys.

A Few Minutes with Tony L.
I have very little to say or recall about Tyson.  Guys like him were everywhere in the 1970s -- and by that, I mean, guys that today would probably not reach Double-A due to their hitting skills but instead made it to the major leagues due to their fielding skills.  As a value proposition, it is far easier to find value through hitting than there is to find value in fielding because fielding statistics are still relatively difficult to negotiate.

For instance, sabermetricians have developed statistics for hitting and pitching that can isolate those items that the hitter and the pitcher can control -- i.e., making and preventing contact and determining which pitches to swing at and which pitches to let go.  But with fielding, infielders playing behind flyball pitchers have fewer chances -- which can skew results.  So, we end up having to rely on video technology to determine range, etc.  That works great for current players, but it is far more difficult to use retrospectively.

Now, some random items I found about this Mike Tyson: