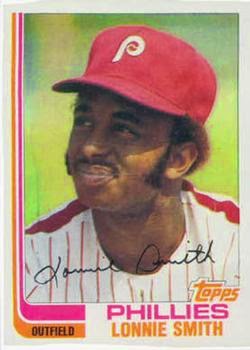 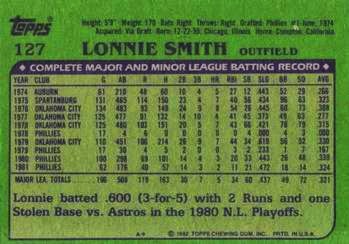 Who Can It Be Now?
Lonnie Smith was born on December 22, 1955, in Chicago, Illinois. His family moved to Los Angeles during his childhood, and, as a result, he was a part of the baseball-mad Compton, California, scene in the 1970s which included guys like Eddie Murray and, from Centennial High School where Smith attended, Al Cowens and Reggie Smith.

Lonnie starred in baseball in high school, leading the Philadelphia Phillies to draft him with the 3rd overall pick in the 1974 June Draft. Smith was assigned to Auburn in the short-season New York Penn League to begin his minor league grooming. At Auburn and at every stop in his time in the minor leagues prior to becoming a major league regular in 1980, Smith did three things very well: he hit for average, he stole bases, and he got on base. In other words, other than not being a power hitter, he was always an asset at the plate. His worst year in the minor leagues came in 1977 in his second year at Triple-A -- and he hit .277/.347/.373 with 45 steals in 52 attempts that season.

Yet, Smith stayed at Triple-A for four full seasons with barely a call-up included for probably three reasons. First, the Phillies were regularly winning the NL East -- doing so in 1976, 1977, and 1978 before dropping to fourth place in 1979. Second, the Phils had a fairly solid outfield with Greg Luzinski thundering around left field, Garry Maddox covering three-fourths of the known world in center, and Jay Johnstone or Bake McBride filling right field.

Finally, something everyone knows about Lonnie Smith is that he was a brutally bad fielder. His nickname was "Skates," after all, because he looked like he was playing baseball while wearing rollerskates -- as one writer put it, "Lonnie Smith ran around like he was on skates. He would fall down anywhere. On the bases. Running for a fly in the outfield." Noted baseball analyst Bill James put it this way in 1987: "You've probably heard what a bad outfielder he is, and let me tell you: They ain't lyin'. He really does fall down almost every game. . . . He can't thrown and has a curious inability to position his glove on a ball hit right at him."

As a quick aside, James actually appreciated how skilled Smith was at disaster recover, as he wrote in his 1986 Baseball Abstract:


Many players can kick a ball behind them without ever knowing it; Lonnie can judge by the pitch of the thud and the subtle pressure through his shoe in which direction and how far he has projected the sphere.... He knows exactly what to do when a ball spins out of his hand and flies crazily into a void on the field, when it is appropriate for him to scamper after a ball and when he needs to back up the man who will have to recover it. He has experience in these matters; when he retires he will be hired to come to spring training and coach defensive recovery and cost containment. This is his specialty, and he is good at it.

Smith made his debut in the majors in 1978 with the Phillies in a late-inning double-switch/pinch runner role. He made the team out of spring training in 1979, but that lasted just 16 games before he was sent down to Triple-A again when he did not get a hit in his 6 plate appearances.

Finally, in 1980, he stayed in the major leagues for an entire season, serving as a fourth outfielder with the Phillies. He played all three outfield positions, appearing more frequently early in the year in right field before the club starting using him in place of Greg Luzinski, whose struggles led Dallas Green to use Smith more frequently down the stretch. Smith responded with a .339/.397/.443 slash line, helping the team earn its first World Series title in its long history.

Smith's reward was to watch the Phillies trade pitcher Bob Walk to the Atlanta Braves in exchange for left fielder Gary Matthews. While Sarge had an awesome year in 1981, it indicated also that the Phillies seemed not to trust Smith. That lack of trust was confirmed on November 20, 1981, when Smith was traded away.  Smith was part of a three-team deal involving the Cardinals, Phillies, and Indians. The Cardinals gave up pitchers Silvio Martinez (who never pitched in the major leagues after this trade) and Lary Sorensen (a fungible innings eater who spent one year in St. Louis). The Indians sent catcher Bo Diaz to the Phillies. Meanwhile, Lonnie Smith came to the Cardinals and was plugged immediately in as the starting left fielder.

Smith responded with one of his best years in the major leagues in 1982. He led the National League in runs scored with 120. He stole 68 bases (though he was caught a league-leading 26 times) while hitting .307/.381/.434. He appeared on the only All-Star team of his career that year, and, to top it off, he finished second in the MVP voting behind Dale Murphy (though neither player was the best player in the league that year; that honor by WAR belonged to Andre Dawson). To top it off, he helped lead the Cardinals to the World Series title -- Smith's second in three years -- and he probably should have been the World Series MVP over Darrell Porter.

And all of this took place before Smith turned 27 years old.

He remained in St. Louis until 1985. In the wake of Smith's admissions that he was addicted to cocaine (more on that below) and his testimony in the Pittsburgh drug trials, the Cardinals decided to ship him across Missouri to the Kansas City Royals in exchange for prospect John Morris. The result: ho-hum. Another World Series Title for Lonnie Smith -- this time over his former Cardinal teammates.

Smith's time in Kansas City, though, is one on which he does not look back fondly. After 1987 -- a season in which he played in just 48 games -- Smith was cut loose to make room for Bo Jackson. In the depths of that offseason, Smith literally contemplated going to Kansas City to shoot John Schuerholz (both links in this paragraph are to stories about this time in Smith's life).

It did not help that Smith was still struggling with chemical dependency at this point. But, Smith was convinced that Schuerholz was bad mouthing Smith to other GMs around the league, and Smith wanted to take his frustration out on Schuerholz. Shortly after that, however, the Atlanta Braves then-GM (and later manager) Bobby Cox made Smith an offer of a minor league contract to show that Smith could still play.

While Smith's 43-game stint for a terrible Braves team in 1988 was not overwhelming, he did get the opportunity in 1989 in spring training to show that he could still play. Smith responded by being the best player in the National League by WAR -- clocking in at 8.8 wins above replacement -- almost 2 wins better than NL MVP Kevin Mitchell and 0.2 wins better than second place Will Clark. Of course, with Smith being worth nearly 9 wins above replacement, the rest of that Braves team was godawful terrible since the team finished 63-97. And yes, a team slash line of .234/.298/.350 is terrible, no matter Smith's fantastic .315/.415/.533 line highlighted by 21 HR and 76 BB in 577 plate appearances.

With the Braves, Smith would appear in two more World Series. Strangely, if not for Otis Nixon's cocaine problem, Smith almost certainly would not have played a key role in the 1991 season for the Braves. But, as Rick James said on the Dave Chappelle Show, "Cocaine is a hell of a drug." Cocaine almost killed Smith's career, and another man's cocaine problem gave him another chance.

But this time, Smith was on the losing end. Indeed, Smith's brain-freeze may have cost the Braves the 1991 World Series. Smith led off the 8th inning by singling off Jack Morris. Terry Pendleton then hit a double into the left-centerfield gap. Inexplicably, the speedy Smith came to a stuttering stop around second base, having been fooled into thinking that the ball would be caught. Smith explained it a decade later as being the result of a delayed steal on which he did not know what happened with the pitch. Instead of scoring -- as one would expect -- he ended up on third base and never scored that run. The Twins won the game in the 10th inning, and the Braves would have to wait until 1995 for their only World Series victory during that incredible 1990s decade.

After the Braves let Smith go after the 1992 season, he signed with the Pittsburgh Pirates as a free agent. The Pirates were trying to replace Barry Bonds with a combination of Al Martin, Orlando Merced, Andy Van Slyke, and Smith. Obviously, that did not work out, and the Pirates ended up trading Smith to the Baltimore Orioles in September of 1993. Smith stayed with the Orioles in 1994, but he did not return to play after the 1994 strike.

Pass the Dutchie
In many respects, Smith was one of the key witnesses in the Pittsburgh drug trials in 1985. The defendant in that case, Curtis Strong, was a former cook for the Phillies before going to Pittsburgh, and Strong supplied Smith with drugs regularly. Some of Smith's testimony included:

As I have softened over the years, I have to admit that it is more difficult now to hate Smith than it was as a 10-year-old. The guy has done the right things in kicking a deep cocaine habit, seeking help, and trying to live a clean life. From his time in Atlanta -- which overlapped with my moving to the South -- I got a better impression of him as a guy who just wanted to do well for his team, tried really hard, and sometimes just couldn't keep his feet. Especially after that 1991 World Series, I couldn't help but feel bad for the guy.

In writing this, I gained a new appreciation for Smith on a statistical level as well. I had no idea that he had a lifetime OBP of .371. A guy with that kind of ability to get on base -- based off walks, hitting ability, and not being afraid to get hit by a pitch (he led the league in 1982, 1983, and 1984 with the Cardinals with just 9 HBP each year).

I also was not aware of the deep-seated enmity that Smith felt for John Schuerholz. From the stories I read and linked to above, it's pretty clear that Smith still holds a grudge over the whole situation in the late 1980s. Smith stated that he avoided Schuerholz during the years that the two overlapped in Atlanta. However, Smith also made clear that he respected Schuerholz's baseball acumen. But, Smith just didn't trust the guy.

After baseball, Smith retired. Literally. He settled with his second wife in Fayetteville, Georgia -- about 30 miles south of downtown Atlanta in a comfortable gated house where he cooks for his three daughters before they go off to school.

And, for what it's worth, Lonnie also spends some of his time responding to requests for autographs -- he rates at a 100% return rate on Sports Card Forum. So send him some mail!
Posted by Tony L. at 7:00 PM