Programming Note: Yes, I'm back. Finally. Here's the thing, though -- life has gotten incredibly busy for me. So much so that I do not have the time to write up the big career stories that I was writing. Instead, going forward, the posts will look more like this one -- a much shorter "Who Can It Be Now?" along with whatever category posts I have and maybe a paragraph wrap-up with my thoughts. 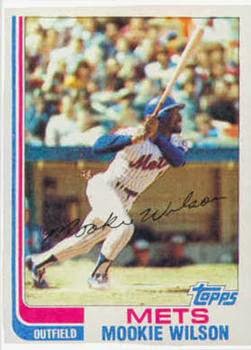 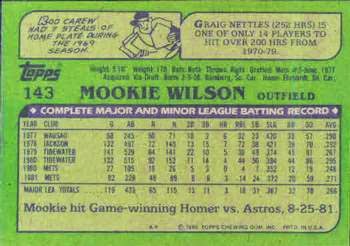 Who Can It Be Now?
William Hayward Wilson -- Mookie -- was born on February 9, 1956, in Bamberg, South Carolina. He became a South Carolina Gamecock eventually, spending his junior year in Columbia. His junior year was good enough to make him the Mets second round pick (42nd overall) in 1977.

If you know one thing about Mookie Wilson's career, you know that he was the guy who tapped the dribbler in the tenth inning of Game 6 of the 1986 World Series -- the dribbler that went through Bill Buckner's legs and scored the winning run. Wilson was one of only a few holdovers on that '86 team from the early 1980s Mets -- most of which were not very good teams.

Mookie spent parts of ten seasons in Flushing, and, indeed, stands 15th at present in career wins above replacement among all New York Mets players -- just behind Howard Johnson and just ahead of David Cone's Mets years. After he left the Mets, he finished his career off with three seasons in Toronto. His career came to a close after the 1991 American League Championship Series in which the Jays lost to the eventual World Series Champions, the Minnesota Twins.

Mookie also had two other brothers who played minor league baseball.  Younger brother John Wilson was the Mets 17th round pick in the 1982 January Draft -- which pretty much guarantees that John was not regarded highly despite impressive speed in the minor leagues.

The youngest of the three Wilson brothers to play professionally was Phil Wilson, who was a fifth round pick of the Minnesota Twins in 1984. Phil had trouble making enough contact to get past Triple-A.

Freeze-Frame
Mookie Wilson parlayed his fame in the 1986 World Series into a TV appearance. He joined Keith Hernandez, Mark Ingram (the Dolphins and Giants WR who fathered the running back who attended Alabama), Sean Landeta, Pee-wee Herman, Jeremy Irons, Madeline Kahn, Itzhak Perlman, Paul Simon, and Rhea Perlman, among others, in singing "Put Down the Duckie" in a 1988 "All-Star Musical Special" of the same name for Sesame Street.

The World According to Garp
In April of last year, Mookie released a book called "Mookie: Life, Baseball, and the '86 Mets." If you are a Mets fan, or if you like good baseball books, this may be one to pick up. The book has been reviewed 21 times on Amazon, and it has received 17 5-star reviews and 4 4-star reviews.

A Few Minutes With Tony L.
Mookie's distinctive nickname made him well-known to all fans of baseball in the 1980s. A number of the reviews of his book mention how much Mookie loved baseball -- playing the game and being around it.

It should come as no surprise, then, that he has spent a great deal of his post-playing career as a coach for his New York Mets. He was unhappy to be named as a club ambassador last spring, however, because it was a role he received after being pushed out of his on-field role. Indeed, this link has excerpts from his book in which he said that he had "basically become a hood ornament for the Mets" after his demotion from being an on-field staff member in 2011.
Posted by Tony L. at 8:28 PM