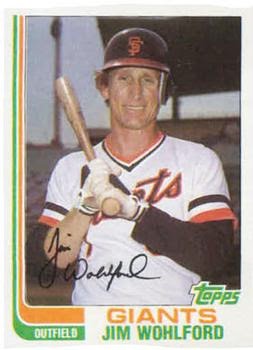 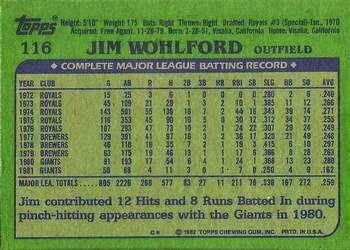 Who Can It Be Now?
James Eugene Wolford was born on February 28, 1951, in Visalia, California. Wohlford attended Mount Whitney High School in Visalia.  The Angels selected Wohlford with the 5th pick of the 11th round of the 1969 draft.

According to an interview from March of 2014 posted on YouTube, the Angels offered Wohlford $16,000 to sign with them -- $8,000 as a bonus and $8,000 for school. Wohlford refused and instead enrolled for a semester at a junior college, College of the Sequoias, also in Visalia. The Kansas City Royals selected Wohlford in the 3rd round of the Secondary Phase of the 1970 January Draft as a draft-and-follow. During the spring season, Wohlford was a Juco All-American.  So, the Royals pushed to sign him.  Again according to that interview, the Royals promised Wohlford that they would promote him as aggressively through their farm system as they can. As a result, Wohlford signed with the Royals.

After he signed, the Royals assigned Wohlford to Billings, their Rookie League team in the Pioneer League, where Wohlford played shortstop, third base, and second base.  When Wohlford hit .308/.380/.398 with 32 SB in 250 plate appearances in 1970, the Royals pushed him to the California League. Wohlford showed he could handle that league as well, hitting .303/.364/.450 while playing middle infield. Thus, true to their word, the Royals skipped Wohlford over Double-A and assigned him in 1972 to Triple-A Omaha.

Wohlford received his first major league callup in September of 1972. appearing mainly as a pinch runner and pinch hitter. Wohlford's problem with the Royals organization was the fact that he played middle infield, for the most part, and the team was fairly set up the middle with Cookie Rojas and the diminutive Freddie Patek. However, in May of 1972 when the Royals needed a bat off the bench, the call went to Wohlford. He stayed up with the big club until early July before being sent back to Triple-A for the last time in his developmental career.

More worrying than the existence of the then 34-year-old Cookie Rojas at second base was the appearance of another middle-infield prospect of the same age as Wohlford: Frank White. As Wohlford said in that interview on YouTube, Kansas City was pretty well set up the middle when White was added to the mix. So, Wohlford started playing outfield in order to get on the field and get playing time.

He found himself being platooned in 1975, perhaps as a direct result of his absolutely horrendous hitting against lefty pitchers that season -- putting up a reverse platoon split (as a righty hitter) that was massive. His OPS versus righties was .742 and versus lefties was .501 -- numbers aided by luck/bad luck showing by BABIP of .327 versus righties and .225 versus lefties.  Those numbers -- and the BABIP -- were nearly reversed in 1976. BABIP versus righties? .227. Lefties? .298.  Ah, the vagaries of sample sizes.

For a team looking to improve on a 90-win season in 1976, then, Wohlford became a convenient trading chit to get more pitching and to improve the team at catcher. Outfielders with an OPS below league average and running at .650 are pretty easy to find, and that made Wohlford expendable. As a result, during the 1976 Winter Meetings, the Royals sent Wohlford, Jamie Quirk, and, eventually, Bob McClure to the Milwaukee Brewers in exchange for pitcher Jim Colborn and catcher Darrell Porter.

As he told the Milwaukee Brewers fan club newsletter in 2010, Wohlford found out he was a Brewer while listening to the radio at his job at Bumper to Bumper Auto Parts.  It's a different game these days. When he came to Milwaukee for the 1977 season, Wohlford came in and declared his intent: to start in centerfield for the Brewers. To do this, he would have to overcome Von Joshua and Gorman Thomas.  Manager Alex Grammas preferred the slap-hitting stylings of Jim Wohlford to the free-swinging, whifftastic power that Gorman Thomas brought to the team. Thus, out of the three, Thomas went to the minor leagues and fell entirely out of favor with the Brewers. Wohlford played left field mostly while Joshua started in center and young Sixto Lezcano was in right.

The Brewers were terrible in 1977, though, and did not finish last only because the division had added Toronto in its first season. Tellingly, the Brewers finished with the fourth-fewest runs scored in the AL -- 93 runs below average -- and with the fifth-fewest homers.

Bud Selig cleaned house in the front office, appointing Harry Dalton as the GM. Dalton brought Thomas back from Texas -- to whom he had been sold.  Joshua was released during spring training in 1978, and Wohlford went from playing in 129 games with 422 plate appearances to getting into just 46 games with 127 plate appearances. The result: the Brewers scored 165 more runs in 1978 (thanks to bringing in Thomas, Larry Hisle, Ben Oglivie, and Paul Molitor, among others).

The writing was on the wall for Wohlford's career in Milwaukee. Still, he had one more year left on his contract in 1979. That year was not much different from the previous year -- indeed, Wohlford's slash line numbers actually declined.  Manager George Bamberger preferred more of a set lineup and his starters (Thomas, Lezcano, and Oglivie) played the bulk of the games in the outfield. As a result, when Jim Wohlford filed for free agency, his agent told the Milwaukee Journal that, "They [the Brewers] haven't showed much interest in re-signing him."

Wolford signed with the San Francisco Giants for three years. In San Francisco, his role was pretty much the same as it had been in Milwaukee -- outfield caddy, pinch hitting, pinch running. By the time 1982 rolled around, Wohlford was 31 and entering his 11th season of major league duty. After the 1982 season, though, the Giants picked up Wohlford's two-year option before trading him to the Montreal Expos in exchange for Chip/Chris Smith -- he of 86 career plate appearances.

In Montreal, the usually light-hitting Wohlford had one season in 1984 where suddenly balls started flying out of the park...at least relatively speaking. In 228 plate appearances that year, Wohlford hit 5 of his career 21 homers and had a SLG that was over 100 points higher than his career SLG.  It was, in all respects, his best year in the majors, since he slashed at .300/.342/.451. In the wake of that season, Wohlford wanted to get a three-year contract worth approximately $1 million for the three years.

Wohlford stayed with Montreal through the 1986 season. At that point, at the age of 35, the Expos decided to go another direction -- perhaps to give Razor Shines a chance? -- and Wohlford found himself without a team. He hooked on with the Cincinnati Reds in 1987 and played a bit at Triple-A. That was, though, the end of Wohlford's playing career.

Mustache Check: Not a whisker to be seen. As far as I can tell from his baseball cards and other photos available of him, Wohlford never did have a mustache or beard.

Rabbit Is Rich
Well, maybe. Wohlford is currently a financial advisor with Stifel in Visalia, where he moved back to after his career was over.

A Few Minutes with Tony L.
Yeah, I don't have much in the way of tidbits or research that I could find. As a kid, of course, I remembered Wohlford playing for Milwaukee and seeing him on cards as a Brewer. He was a guy I recalled not thinking too much of as a player, but in the way that only a "Wisconsin-proud" kid of 8 years old could think, I hoped that Wohlford would never do anything to make the Brewers regret letting him go.  If you don't believe me about the "Wisconsin-proud" thing, though, just go ahead and insult the Wisconsin Badgers or troll the Green Bay Packers. Most fans can shake off trolling, either laughing at it or ignoring it. Packers/Badgers/Brewers fans take the bait, swallow the hook, then start sucking on the fishing line like it's spaghetti.

So, a couple of random factoids on Jim Wohlford:


Wohlford was never a star, but as he is quick to point out, he had a very long career for a bit player.
Posted by Tony L. at 7:00 PM