After a week away for a trip for work, the 1982 Topps Blog is back! 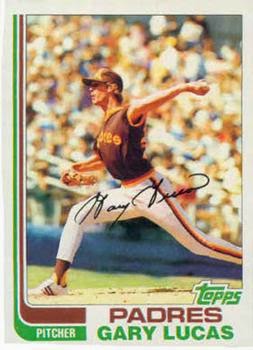 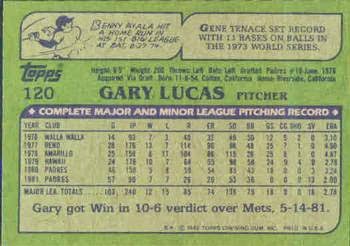 Who Can It Be Now?
Gary Paul Lucas was born November 8, 1954, in Riverside, California. Lucas grew up there and attended Riverside Poly High School.

He was not drafted directly out of high school, but he was selected in the 1st round of the regular phase of the January Draft in 1973 as a draft-and-follow juco player by the Cincinnati Reds.  He did not sign with the Reds prior to the June Draft in 1973, so the Reds selected him again in the first round of the secondary phase of the June draft. Once again, Lucas did not sign. Lucas completed his juco experience and enrolled at Chapman University in Orange, California. From there, he was selected by the San Diego Padres in the 19th Round of the June Regular Draft.

Lucas signed with the Padres and was sent to an age-appropriate Low-A ball team in Walla Walla, Washington. There, Lucas pitched pretty well -- 7-3 record, 3.10 ERA -- and earned a trip in 1977 to the California League. On its face, it appeared that he was hit around a bit in Reno that year with a 4.60 ERA in 176 innings but the reality was that he led the team in innings and, further, had an ERA that was a full run-and-a-half below the team ERA of 6.07.

The Padres apparently realized the context of his numbers and promoted him to the Texas League in 1978. With Amarillo, Lucas once again had numbers and a record that looked less than impressive -- 8-17 record, 4.87 ERA in 159 innings. Once again, though, context was important -- the team went 44-89 and had a team ERA of 5.23 (and the league was at 4.91). Once again, Lucas earned another promotion.

In 1979, then, Lucas found himself pitching for Hawaii. In a more normalized environment, his numbers facially improved tremendously. In 24 starts and 178 innings, he had a 2.78 ERA while giving up just 15 HR and 151 hits. Perhaps the team knew all along that Lucas was a good major league prospect since they kept promoting him, but that season in the PCL was Lucas's last in the minors until much later in his career.

Coming out of Spring Training, Lucas made the Padres as a starter/swingman.  Indeed, Lucas made the only 18 starts of his major league career during the 1980 season and was reasonably successful: 4-7 record with a 3.62 ERA (league ERA: 3.60) and a 1.235 WHIP (league: 1.321) in 109-1/3 innings. He only struck out 4.4 batters per 9 innings in a league that struck out 5.1 per 9, but why did the Padres move Lucas to the bullpen? The other two lefties to pitch 150 innings that season were "proven veterans" John Curtis and Randy Jones. and Bob Shirley also pitched 137 innings split between starting and relieving.

Perhaps the real point was that Manager Jerry Coleman didn't know who he wanted in the starting rotation. Alternatively, the Padres may have been struggling with injuries to guys they were counting on to be starters, leading Coleman to chop and change his rotation regularly. Eleven different pitchers started at least one game for San Diego in 1980, eight pitchers started at least 10 games, but no one started more than 27. Indeed, of the pitchers with 10 or more starts, four of them also had at least one save!

Changes came after the 1981 season. The team traded closer Rollie Fingers, who had saved 23 games in 1980, in a 11-player deal to the St. Louis Cardinals. Dave Winfield left in free agency. The team got much younger (other than 35-year-old Rick Wise and 33-year-old John Curtis, the entire pitching staff was 28 or younger). As a result, at the age of 26, Lucas became the Padres closer for the 1981 season.

The way Lucas was used in 1981 shows how roles have changed in the major leagues. Lucas led the National League in appearances with 57 and finished 40 games. He only saved 13 of those -- probably because the team was bad -- but, more surprisingly in the strike-shortened 1981 season, he pitched ninety innings all in relief that year.  In fairness, Lucas responded well -- putting up a 2.00 ERA (2.87 FIP), walking 36 (but 15 of those were intentional), giving up just 78 hits and striking out 53. It was a very good year, and those statistics earned him the card ending in zero for 1982.

Lucas remained the Padres closer for 1982 and 1983. After old Hondo -- Frank Howard -- put Lucas through the grinder in 1981, he was treated somewhat better by new manager Dick Williams in 1982. Lucas struggled in 1982 -- at least on the face of his win-loss record by finishing with 1 win against 10 losses.  Usually wins and losses are not the most meaningful stats, but if your putative closer is losing 10 games, it means he has struggled. Williams started platooning at closer in a way, using both Lucas (16 saves) and Luis DeLeon (15 saves) to close out games. 1983 was more of the same, though Lucas lost 8 times and won 5 -- he and DeLeon split 30 saves between them at 17 for Lucas and 13 for DeLeon.

After two consecutive 81-81 seasons, though, Padres brass decided that they needed to shake their roster up. Part of that shake-up was a three-team, six-player trade during the winter meetings in which the Padres sent Lucas to the Montreal Expos.  The Padres received Al Newman from the Expos and Fritzie Connally, Craig Lefferts, and Carmelo Martinez from the Cubs. The Expos also sent Scott Sanderson to the Cubs.  So, the only player that the Expos got for Al Newman and Scott Sanderson was Lucas.

So, Lucas left San Diego just as they were getting to be a good team and jumped on board a sinking Montreal team that already had Jeff Reardon and Bob James in its bullpen. As a result, Lucas moved more into a LOOGY-type role -- 55 appearances, 53 innings -- though in 1984 in the days of the five-man bullpen, LOOGYs really didn't exist.  Lucas spent two years with the Expos and pitched well once again -- an ERA under 3 in 120-2/3 innings over two years with 9 saves.

After the 1985 season, Lucas was traded to the Angels for a minor leaguer and pitcher Luis Sanchez (who would not pitch again in the major leagues).  Injuries limited Lucas to just 27 appearances in the regular season in 1986, and considering the car-crash that was his 1986 post-season, he probably wishes that he had not appeared in the ALCS against the Red Sox. Lucas pitched 2-1/3 innings and gave up 3 hits, a walk, and a hit batsman, leading to 3 earned runs being charged to his account (11.57 ERA).

Indeed, one of the more infamous parts of the 1986 ALCS was the Dave Henderson home run off Donnie Moore (which in part led to Moore committing suicide). Lucas came into that game in relief of starter Mike Witt to face catcher Rich Gedman. On the one and only pitch that Lucas threw, Gedman was nicked on the forearm. Lucas was then removed from the game for Moore. Moore gave up the two-run home run that put the Red Sox ahead, and Lucas was left only with regrets. As he said in a 2010 interview, "I let a lot of people down. I let myself down. And to be quite honest, it never leaves you completely."

Lucas finished up his major league career in California in 1987. He pitched in the Giants farm system in 1988 but never received a call to come up to the major leagues. As he said later, he had some back problems at the end of his career that he could not overcome, and he hung up his spikes after the 1988 season.

Mustache Check: I can't tell if he has one here or not, but he has always had one during his career and has one on each of his other cards in 1982.  So I'm saying, "Mustache!"

The Message
To be honest, I don't have much for Gary Lucas. He's lived a pretty quiet post-career life. He's been a pitching coach for a long time in the minors. But why "The Message" for him? Because he turned down numerous opportunities to move up in the Twins organization so that he could keep his base of operations in one place throughout the past 15 years so that his daughters could grow up in one place.

A Few Minutes with Tony L.
Gary Lucas made no impression on me in the early 1980s. He was a National League player on the West Coast who pitched for a team that hardly got any publicity until 1984 -- and by that time he was gone.

As I said above, Lucas has spent most of the time since he retired in 1988 as a minor league pitching coach. He started his sojourn with San Jose in the California League in 1991. His wife is from the Midwest, so he asked to be located in the Midwest so that his wife and daughters could be around her family while he was on the road all the time.

He then went back to Beloit from 2008 through 2012. When that team moved to Cedar Rapids for the 2013 season, he followed. He moved to the Florida State League to be the pitching coach under Doug Mientkiewicz for the 2014 season. That team finished 82-57, but somehow did not qualify for the playoffs.

Despite all that time with the team, the Twins announced on September 26, 2014 that Lucas and the Twins had parted ways. I am hopeful for Gary Lucas's sake that this parting of the ways was mutual and, further, that Lucas simply decided to get off the road entirely. It's possible, certainly, that the reason for the move is that Lucas wants to be back in the Midwest.