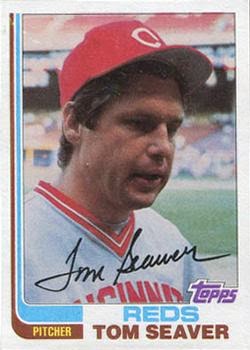 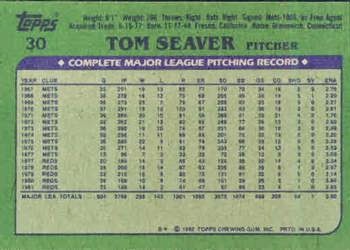 Who Can It Be Now?
George Thomas Seaver was born on November 17, 1944, in Fresno, California...goodness, that means Tom Terrific turns seventy years old this year.  Seaver was born and raised in Fresno -- playing little league ball starting at age 9 there and later attending Fresno High School.  He joined the U.S. Marine Corps Reserves, went too basic training, and then served six months of active duty in the Reserves before enrolling at Fresno City College.

Seaver was being recruited to play at the University of Southern California, but, the story goes, Coach Rod Dedeaux was unsure whether Seaver deserved a scholarship.  So, Seaver went to Fairbanks, Alaska, in 1964 and starred for the Arizona Goldpanners (let the yearbook load -- it's really interesting as a historical recap of Alaska summer league baseball; the Seaver reference is located on page 13), thereby earning a scholarship.

According to Bill Lee in his extremely funny book The Wrong Stuff, Dedeaux must have come over to the side of Seaver being a star pretty quickly.  Actually, let me quote Lee's book here at some length:

Dedeaux loved [Seaver], calling him his "Phee-nom from San Joaquin."

Tom didn't have much of a breaking ball back then, but he threw awfully hard. He was just starting to mature and was more of a thrower than a pitcher.  His personality was strictly laid back, very Fresno.  But underneath that placid exterior was a great competitiveness.  He exuded confidence without opening his mouth.  One look at him told you that he had a future of big cigars and long limousines.

Seaver only played at USC for one year, as he got caught up in a bunch of desk-jockey bureaucratic garbage not unlike the issues that the NCAA busies itself with today.  He was drafted first by the Los Angeles Dodgers in the June 1965 draft -- after his year in junior college -- but asked for $70,000 to sign.  The Dodgers thought that price was too high, so they let Seaver go to USC.

The rules were different in those early years with all the multiple drafts, so Seaver was drafted again at the end of the first round of the January 1966 Draft Secondary Phase by the Atlanta Braves.  He signed with the Braves -- a team that Seaver himself called his team of choice due to their uniforms and their hitters, according to his SABR bio -- but that contract was voided by then-Commissioner (and former Air Force Lieutenant General) William Eckert because USC had played two exhibition games before Seaver signed -- the rule was that once the college team started play, the players on the team could not be signed.

But, Seaver had signed a contract with a professional team -- albeit one that was void from the start according to Major League Baseball.  As a result, the NCAA in the infinite wisdom that has marked its existence from its creation to today decided that Seaver was no longer eligible to play college baseball.  Seaver's father complained to the commissioner and threatened legal action, so General Eckert allowed other teams to match the contract that Seaver signed with the Braves.  Three teams -- the Philadelphia Phillies, the Cleveland Indians, and the New York Mets -- all stated they would match the original contract terms, and the Mets won Seaver's rights through a lottery drawing.

Seaver's talent was apparent immediately.  Future Baltimore Manager Earl Weaver's Rochester team faced Seaver while Seaver was in his one season at Triple-A Jacksonville in the International League in 1966.  Weaver said that "[i]t was apparent in Tom Seaver's pro debut that he was ready for the majors . . . After Jacksonville beat us, I phone [then Orioles General Manager] Harry Dalton and said that Seaver was going to be sensational and the Orioles could give up a piece of the franchise and do well to get him."

By the end of his one year at Jacksonville, Seaver had struck out 188 and walked just 66 in 210 innings pitched.  After that season, he never pitched in the minor leagues again.  He went to spring training in 1967 with the Mets and made the team immediately, thereby beginning his incredible 20-year career.  Seaver's career has been the subject of numerous extended treatments -- everything from the SABR biography mentioned above which is short at 16 pages to multiple full-length books.

To list the awards and accolades Seaver earned in his illustrious career runs the risk of minimizing them, but here goes:  He was the 1967 National League Rookie of the Year based on his 16-13 record, 170 Ks, and 2.76 ERA.  Frankly, on the numbers, any one of the three pitchers who received votes -- Seaver, Dick Hughes, or Gary Nolan -- all would have been worthy winners but, based on Wins Above Replacement, the BBWAA got it right.

Seaver was a 12-time All-Star.  He won three Cy Young Awards -- in 1969 (nearly unanimously), 1973, and 1975.  He finished second twice -- in 1981 at the age of 36 by just three votes behind Fernando Valenzuela and in 1971 behind Ferguson Jenkins -- and also finished third in 1977.  He was second in the MVP voting in 1969 through helping lead the Amazin' Mets to their first World Series Championship, losing out to Willie McCovey.

By the time 1982 rolled around, Seaver had become very much the elder statesman.  He turned 37 in late 1981, and he was coming to the end of his contract with the Reds.  He had an injury-filled 1982, starting only 21 games while suffering from shoulder problems.  The Reds were horrible that year as well -- finishing with a 61-101 record.  As a result, the Reds were happy to return Seaver to the Mets for the 1983 season.

Baseball's free agency compensation system was different in 1983 than it is today; teams were allowed then to select an "unprotected player" from any team in the major leagues. The Mets thought it would be unlikely that any team would want a 39-year-old pitcher with a suspect shoulder who was making over $1 million a year, so they left Seaver unprotected.

The Mets were wrong.  The Chicago White Sox snapped Seaver up as compensation for losing Dennis Lamp.  As a result, Seaver reached his 300th win as a member of the White Sox, beating the Yankees on August 4, 1985.  By the end of 1985, though, Seaver had seen his mother pass away and asked the White Sox to trade him to either Boston or New York so that he could spend more time at his Connecticut home with his family.  As a result, Seaver spent the last half of his last year in the majors with the Red Sox in 1986 -- and had his career end in the World Series with a New York Mets victory against his Red Sox.

This Is Radio Clash
Seaver was always considered to be an articulate, well-spoken player.  In the mid-1970s, for instance, Seaver served as the Mets player representative.  So, it was not surprising when Seaver went upstairs to the press box.  It may have been somewhat surprising, however, that he spent his first five years in broadcasting sitting next to Phil Rizzuto in the New York Yankees broadcast booth.  He later spent seven years broadcasting Mets games.

I'm Going to Hire a Wino

Frankly, this may be a one-off category, but I kind of hope not.  I really like David Frizzell's song "I'm Going to Hire a Wino" from when I was a kid.  It is humorous but has a biting wit to it that is missing at times from country music these days.

Now, I'm not saying Tom Seaver is a wino.  Instead, this category is here to talk about wine and vineyards. Nancy and Tom Seaver now own and operate Seaver Vineyards.  The idea, apparently, was something Tom had wanted to do immediately after retiring, but it took him and his wife until 1998 to find the right acreage and location.  I have not tried any of his wine, but I would love to hear from anyone who has.

A Few Minutes with Tony L.
Since the next card in the set is Tom Seaver: In Action, I get the opportunity to talk about Seaver at length.  A player like Tom Seaver is one that even a 10-year-old kid remembers hearing about.  The one thing that sticks with me from that time is how I really always think of Seaver as a member of the Cincinnati Reds and not the New York Mets.  The obvious reason for that is simple: my card collecting that I remember really started in 1978.  Yes, I had a bunch of 1977 cards, but 1978 was the time from which the photos on the cards stuck in my head.  And, by that time, Tom Seaver was a member of the Cincinnati Reds -- just like Johnny Bench or Tony Perez or Dave Concepcion.

Because he ended up with the White Sox for a couple of years, I did not like Seaver.  It was especially painful to watch Seaver win two games on the same day on May 9, 1984, when he won the previous night's suspended 25-inning game (thanks to a walk-off home run by Harold Baines that I can still in my mind's eye see landing just beyond the centerfield fence on TV in the old Comiskey Park) and then pitched 8-1/3 innings in his regularly scheduled start shortly thereafter to win again.

Even though I only caught the tail-end of his career, he did not take Steve Carlton's path to retirement of hanging around so long that you forget how great he was.  Sure, his ERA in his last season was above 4, but he pitched very well for the Red Sox in particular.  He finished with 311 wins and, along with his friend Nolan Ryan and Carlton, pushed Walter Johnson into fourth place all time on the career strikeout list.

There is no question that Seaver belongs in the Hall of Fame and that he was a deserving first-ballot Hall of Famer.
Posted by Tony L. at 7:00 PM

Email ThisBlogThis!Share to TwitterShare to FacebookShare to Pinterest
Labels: I'm Going to Hire a Wino, Reds, This Is Radio Clash, Tom Seaver