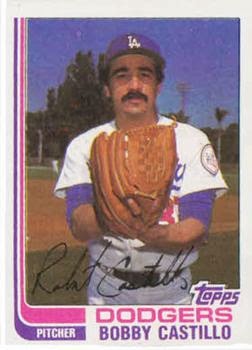 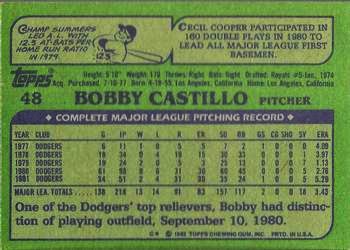 Who Can It Be Now?
Robert Ernie Castillo, Jr. was born on April 18, 1955, in Los Angeles, California.  According to this interview he did for TV Learning, he grew up five minutes from Dodger Stadium, so getting to pitch and play for his hometown team was a dream come true.  And, to be fair, Castillo was not kidding about growing up practically next door to Dodger Stadium -- his high school, Abraham Lincoln High, is literally 2.9 miles and 10 minutes away from the Stadium.

One website claims that Castillo was a gang member in Northeast LA in the 1960s who ran around "with all his homeboys and homegirls from Lincoln Heights . . . ." I have not seen any other references to this, but it is certainly a plausible statement.  The problem I have with believing that is that the website mangles a few other details.  It's not big stuff, and it's tough to imagine a reason to use Castillo as the foil for the "gang member leaves gang to be a pitcher" meme other than truth, but it does take away from that write-up.

Anyway, Castillo was drafted for the first time out of Los Angeles Valley College in the 6th round of the 1974 January Regular Draft by the Kansas City Royals.  Even though he is listed as being signed as a pitcher, the Royals had him playing outfield and third base for their Gulf Coast League affiliate.  The Royals saw him as being too short -- at five-foot, ten inches tall -- to be a pitcher, so they released him.

That off-season, Castillo was playing in a semipro game at the Evergreen Recreation Center in Boyle Heights, California.  Into the batter's box stepped 40-year-old former minor leaguer Mike Brito against Castillo.  Castillo struck out Brito on a wicked screwball -- one that fooled Brito so badly that Brito almost hurt his back, according to Castillo.  As a result, Brito arranged for Castillo to come to Mexico to pitch.

Castillo then appeared in the Mexican league in 1976 and 1977.  The Dodgers eventually purchased Castillo's contract from the Royals in June of 1977.  Castillo finished up his summer in Mexico and then made his way to Dodger Stadium in September.  The 1977 Dodgers ran away with the NL West Division title, winning by 10 games over previous champion the Cincinnati Reds, so Castillo got the honor of starting the final game of the season against the Houston Astros in Los Angeles.

Castillo made the Dodgers as a reliever in 1978.  In spring training that season, then-GM Al Campanis made the point to the Associated Press that the Dodgers were very pleased with Castillo, saying, "He's really come along since he developed that screwball.  He's got a good chance to make the club."

Despite the happy talk in the spring, Castillo got roughed up that year, however, and he did not distinguish himself.  His first game of the year was a save, but otherwise the Dodgers lost every other game in which Castillo appeared.  Castillo was pinned with the loss four times -- three of which came before the Dodgers sent him back to Albuquerque in June to get more seasoning.

The 1979 season saw Castillo start in Albuquerque.  The Dodgers struggled that year, finishing at 79-83, so they started blooding youngsters like Castillo.  He got his chance in early August to pitch the rest of the season exclusively as a reliever, and he pitched well -- 7 saves and two wins (one caused by his own inability to save the game) in 19 appearances with a microscopic 1.11 (or 1.13, if you believe Topps) ERA that season.

After that year, Castillo was sent to the Arizona Instructional League.  It was not because the Dodgers thought he needed the extra work, however -- it was because Castillo was going to teach the screwball to Fernando Valenzuela.  As the book Viva Baseball!: Latin Major Leaguers and Their Special Hunger by Samuel Octavio Regalado noted, the benefit to having Castillo and Valenzuela work together that fall went beyond simply pitching.  As quoted by Regalado, Valenzuela's biography by Mark Littwin stated that Castillo and Valenzuela "immediately became companions on and off the field.  Fernando was naturally attracted to someone who might help him, who spoke the same language, and who shared some of the same experiences."

Castillo pitched very well again in 1980 for the Dodgers, pitching 61 games as a reliever with a 2.75 ERA over 98-1/3 innings.  At age 25 at the start of the 1981 season, things were looking good for Castillo in Los Angeles.  His protege Valenzuela was up in the majors and pitched extremely well, and his Dodgers won the World Series.  To be fair, the Dodgers did well in 1981 despite Castillo -- his 5.33 ERA was terrible if not entirely deserved (3.92 FIP shows that).

Castillo was traded to the Twins after the 1981 season for two minor league players.  The Twins decided to make Castillo a starter at the age of 27.  To be fair, Castillo did well in the role, leading the Twins in ERA and wins and finishing second to Brad Havens in strikeouts for a terrible Twins team.  Castillo remained with the Twins for two more seasons before returning to the Dodgers as a free agent before the 1985 season.  That year was his last as an American Major Leaguer. He closed out his career by playing in Mexico in 1986 and in Japan for at least a couple of seasons before retiring.

Everybody Wants You
As mentioned above, Castillo did not appear for the Dodgers at all in 1982.  He was traded to the Minnesota Twins in exchange for minor leaguer Paul Voigt and Scotti Madison.  Madison would not appear in the major leagues until 1985 with the Detroit Tigers.

Trivial Pursuit
The Mike Brito story involving Castillo is interesting for two reasons.  The first, of course, is that it got Castillo his start toward playing for the hometown Dodgers.  The second is that, at the time, Mike Brito was not scouting for anyone.  Do you know who Mike Brito is?
If you ever watched a Dodgers game in the 1980s or 1990s, you saw Brito behind home plate, wearing his Panama hat, holding a cigar in one hand and the radar gun in the other. He's known as one of the Dodgers' best ever scouts, and without Bobby Castillo he never would have had a job.  The reason was that, as the LA Times article about Brito's at bat mentioned, Al Campanis gave Brito a job contingent on getting Castillo to sign with the Dodgers.  Castillo did so, and the rest -- which includes not only Castillo, but also Fernando Valenzuela and Yasiel Puig -- is history.

A Few Minutes with Tony L.
Bobby Castillo does not exactly strike fear in anyone.  I mean, take a look at that card photo. His glove looks like it is as big as Castillo's torso.  Even in 1982, the photo made me think that Castillo was no bigger than my 10-year-old self borrowing a glove from an adult and getting on a baseball card -- except, of course, for that huge mustache.

These days, Babo (as he is also called) basically gets one line from all the major baseball and encyclopedia sites for being the guy who taught Fernando the screwball. To be fair, the best I can do is to point out that Castillo is one of the most active Dodgers Alumni in making appearances on behalf of the Dodgers.  I mean, if you go to the Dodgers website and look at the "Dodgers Alumni League" page, there's a picture of Bobby Castillo at the Pico River PONY Baseball Opening Ceremonies.