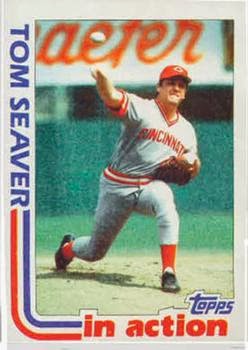 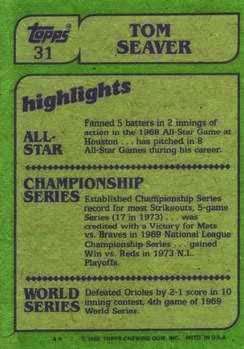 Who Can It Be Now?
It's Tom Seaver in action in a road game.  This is the second of four card on which Seaver appears in the 1982 Topps set.

Yesterday's post mentioned many of the accolades that Seaver had earned throughout his career, among other things.  One of the darker incidents in his career, however, was his trade from the Mets to the Reds in 1977.  Why would the Mets trade such an excellent pitcher who was just one year removed from a Cy Young Award? Well, because Seaver demanded the trade, but he had a very good reason.

For some time leading up to the trade, Seaver had made an enemy in New York Daily News columnist Dick Young. Young was a trailblazer in baseball writing in that he went into the clubhouse, talked to people, and reported what was said rather than following one of those "unwritten rules" about how what is said in the clubhouse stays there.

At any rate, Seaver had complained openly about how the Mets had not made any efforts to better the team through the new avenue of free agency.  At the same time, Seaver was working on a new contract of his own with the Mets, so Mets ownership used its relationship with Young (the Mets had hired Young's son-in-law as vice president of communications) to portray Seaver as the bad egg.  One quote from a Young article in June of 1977, on the same day that Seaver was traded, is enlightening:

That wasn't the worst part, though.  Young brought Seaver's wife into the conversation:


Nolan Ryan is getting more now than Seaver, and that galls Tom because Nancy Seaver and Ruth Ryan are very friendly and Tom Seaver long has treated Nolan Ryan like a little brother.

The previous night, Seaver had reached an agreement with the Mets on a contract extension.  When he saw the Young article, however, Seaver refused to sign the extension and demanded an immediate trade.

As an aside, the end result for Young for his part was not subtle; he was inducted into the Baseball Hall of Fame in 1978 by receiving the J.G. Spink Award for baseball writing.  At the induction ceremonies, Young was booed.

The World According to Garp
When a professional athlete is very successful in his career, publishers come calling to capitalize on that success.  In Tom Seaver's case, he teamed with ghostwriters and co-authors on several occasions to make a little money for himself.  In chronological order:

I don't own any of these books.  After reading various synopses and looking at these books on Amazon or elsewhere, I'd be interested to see the baseball card book (though it looks like it is just a price guide).  I would like to read the last one, because it claims to be Seaver throwing out the question of "What is your best baseball memory?" to players such as Willie Mays, Cal Ripken, Jr., Roger Clemens, Nolan Ryan, Duke Snider, Yogi Berra, Vida Blue, Rusty Staub, Hank Aaron and Sammy Sosa.

As of 2014, Tom Seaver hold the mark for receiving the highest voting percentage in the Hall of Fame voting.  Only 5 ballots out of 430 left his name off when Seaver was voted into the Hall in 1992, and three of those were blank ballots submitted in protest for Pete Rose's exclusion from the ballot.

How is it that Seaver -- and not Babe Ruth, Ty Cobb, Hank Aaron, Nolan Ryan, Cal Ripken, or Greg Maddux -- gets that honor?

Start with the first Hall of Fame entrants.  Ruth was elected just months after retiring, but he, Cobb, Honus Wagner, Christy Mathewson, and Walter Johnson were elected all at the same time.  With voters being drawn in so many directions at that time to get the best players into the Hall of Fame, it is easy to understand why they failed to reach the 98.83% of votes that Seaver received.  Even in that context, though, Cobb received 98.2% of the vote despite being a total jackass.

Frankly, the fact that Seaver received the highest percentage of votes of anyone so far says a few things.  First, he was nice to reporters generally and, by the time the vote came around, he was a part of the media.  That doesn't hurt at all.  Second, there was not any kind of steroid issue hanging over an entire generation such that people withheld votes without any suspicion of Seaver being involved.  In 1992, it was just Pete Rose.  Today, it's literally half the ballot.

Finally, there is a bit of randomness involved here.  The fact that someone would leave a Cal Ripken off the ballot because Ripken played in the steroid era or because it is the player's first year on the ballot -- I'm looking at you, Paul Ladewski -- frankly should be grounds for removal from voting privileges.  But, it also is a guarantee of sorts that no one will ever be unanimous.

That is, unless everyone's favorite captain Derek Jeter somehow convinces everyone else otherwise.
Posted by Tony L. at 5:00 PM

Email ThisBlogThis!Share to TwitterShare to FacebookShare to Pinterest
Labels: Hall of Fame Voting, Reds, The World According to Garp, Tom Seaver