Apologies for the time passage over the Fourth of July weekend between updates.  Today, we have a Seattle Pilots draftee: 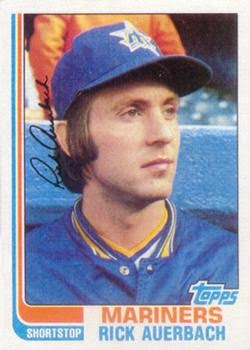 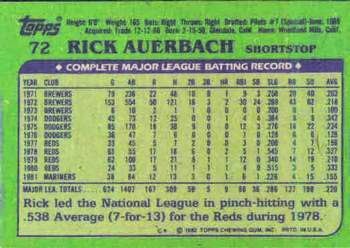 Who Can It Be Now?
Frederick Steven Auerbach was born on February 15, 1950, in Woodland Hills, California. According to Baseball Reference, he attended two high schools so I went to Wikipedia to see what they had to say about it.  According to the Wiki, Auerbach graduated from Taft High School in Woodland Hills in 1968.  The reason that is of any importance is a highly coincidental fact from later in Auerbach's career.

Auerbach was drafted straight out of high school by the California Angels in the 13th Round of the 1968 draft, but he did not sign with the Angels. As he mentioned in an article a couple of years later, he decided not to sign with the Angels because they had Jim Fregosi at shortstop already.  Instead, he went to junior college at Los Angeles Pierce College at home in Woodland Hills (where he played on the same infield as Doug DeCinces) before he was drafted again by the Seattle Pilots in the Secondary Phase of the 1969 January Draft in the 7th Round.  If it tells you anything about that draft, Auerbach was the only player drafted in his round to make it to the majors.

Auerbach signed with the Pilots and played at three Rookie Ball and Single-A teams in 1969. In a system as bereft of talent as the soon-to-be Brewers were, Auerbach was pushed up the ladder quickly.  This came about in 1970 for Auerbach both as a function of his results -- .307/.383/.398 between Single-A Clinton and Triple-A Portland -- and by the fact that Milwaukee, as an expansion team, did not have a Double-A affiliate in 1970.

As 1971 dawned, Auerbach broke spring training as the Brewers starting shortstop.  As then-manager Dave Bristol said at the time,


He has to play, with the Brewers or in the minors, so he can learn his trade.  We'll try him now -- not too long, if he has trouble -- and we'll wait on him if he have to, because he could be a good one.

As a result, Auerbach started for the Brewers until the end of June, when the team decided that Auerbach needed some additional time in Triple-A. His anemic .194/.280/.236 slash line at the time of his demotion backed up the decision.  As a game story from later in the year noted, "Auerbach lasted until June, when it was apparent he had trouble hitting both for average and distance." He was called back up for a three-game series in August but was sent right back down until September.

In 1972, Auerbach had the opportunity to play every day.  It was the only time in Auerbach's major league career that he was an every day player, and he struggled -- slashing at .218/.277/.269, an OPS+ of 65 (meaning his OPS, normalized for his home field, was 35% below league average), and he made 30 errors at shortstop.  Add in the fact that Auerbach's biggest supporter, manager Dave Bristol, was fired 30 games into the 1972 season and eventually replaced with Del Crandall, and Auerbach's leash suddenly got shorter.

Going in to 1973, the 23-year-old Auerbach was still primed to be the Brewers starting shortstop.  He did show some progress in 1972, but he needed to show more, as an AP preseason breakdown put it:


Shortstop Rick Auerbach improved his range and throwing considerably last season, his first complete one in the majors.  He gave the club badly needed speed with 24 stolen bases in 32 attempts, but lacks power and must hit more to right field to improve his .218 average.

It's difficult to say exactly what it was that set Del Crandall and/or General Manager Jim Wilson against Auerbach at first.  Perhaps it was his weak bat.  Perhaps, as this article claims, Crandall decided to get rid of Auerbach after Auerbach cost the Brewers a game with an error against Baltimore in April (situation: Brewers ahead 7-6 in the bottom of the tenth inning, runner on first, Auerbach botches a double-play ball.  Next two hitters up single, scoring two runs and leading to an 8-7 defeat.).

In any case, the Brewers sent Auerbach to the Dodgers in exchange for Tim Johnson.  As an aside, the next season, Johnson was moved off shortstop due to the fact that an 18-year-old kid from Taft High School in Woodland Hills, California -- Robin Yount -- grabbed hold of the shortstop position and didn't give it up until his shoulder forced him to do so nearly a decade later.  Indeed, Auerbach and Robin's older brother and agent Larry graduated high school together in 1968 and even share the same birthday.

Auerbach's career after 1973 is nothing more than being a utility man.  He stayed in Los Angeles with the Dodgers through the 1976 season.  In early 1977, he was traded to the New York Mets for a minor leaguer and a player named Hank Webb.  He stayed with the Mets for a month, and was assigned to Triple-A Tidewater before being traded again to the Texas Rangers with cash for Lenny Randle.

After that trade, an interesting story developed.  A 1980 article from the St. Petersburg Independent tells the story:


Okay, said the Rangers, come on the road with us for seven days, work out, and we'll sign you to a major league contract.  Auerbach agreed.

"I was what you called the DP -- the designated player.  I wasn't given a number, just a uniform. I'd work out before the game and then during the game I'd sit in the stands. After that week, Texas told me to report to New Orleans.

At that point, Auerbach said in his best South Park/Eric Cartman voice, "Screw you guys, I'm leaving."  Literally.  Instead of reporting to New Orleans, he went home to California and went fishing.  He started contemplating his future, including possibly taking the California real estate licensing exam.  Then, on June 15, 1977, the phone rang -- the Reds had purchased his contract from Texas and promised him that they would bring him to the major leagues.  So Auerbach came back from his self-imposed exile to serve as a utility infielder for a couple of years.

Auerbach ended up back with Texas in July of 1980, but, again, it does not appear that he played a game in either the majors or the minors for that organization.  He then was traded to the Seattle Mariners before the 1981 season along with a minor leaguer (Steve Finch), Brian Allard, Ken Clay, Jerry Don Gleaton, and Richie Zisk in exchange for Larry Cox, Rick Honeycutt, Willie Horton, Mario Mendoza, and Leon Roberts.

After 96 plate appearances for the Mariners during 1981, Auerbach's career as a baseball player ended.

Mustache? Nope, Auerbach is clean shaven.  He tries to make up for it with his bushy 70s sideburns, but he's not fooling us.

Trivial Pursuit
Despite the fact that Auerbach played just three nondescript seasons with the Los Angeles Dodgers and logged 323 plate appearances over 166 games, the Dodgers retired Auerbach's number 1 in 1984.  The reason, of course, was that number 1 was worn from 1940 through 1958 by Hall of Famer Pee Wee Reese.  As Auerbach put it in a news article, "I tell people the Dodgers retired my number, but it wasn't because of me."

A Few Minutes with Tony L.
Auerbach's tie to the early days of the Milwaukee Brewers was certainly the most interesting part of this biography to me.  Some of those stories from the 1971 through 1973 season emphasized just how tentative life as a fan of an expansion baseball team really is.

The Brewers were sucking wind, badly, in 1971.  Keep in mind that this was a city that had lost its National League team, the Braves, just 6 years earlier, and the Brewers were not replacing local baseball fans in the hearts and minds of the local populace very quickly. Attendance in 1971 -- to see a team finish 69-92 -- was just 731,531.  Somewhat surprising to me is the fact that the Brewers actually finished ahead of two other teams -- the second incarnation of the Washington Senators and the Cleveland Indians -- in total attendance that year.  Indeed, all three of those teams averaged fewer than 10,000 people per home game.

Things got worse in 1972, with attendance falling to just 600,440 people.  Lots of chopping and changing took place in the front office after that season -- with GM Frank Lane being reassigned to a scouting position.  The changes helped in 1973, and further trades made the team able to climb out of the basement.

Perhaps Rick Auerbach looked back on his days in Beertown with wistful nostalgia.  I say that because later in life, Auerbach became an excellent bowler.  Milwaukee is America's Bowling Capital -- probably in part due to the harsh winters, in part to the German heritage in the area, and in part to the fact that you can drink copious amounts of beer while bowling.

I have no idea whether Auerbach bowled while in Milwaukee, but the guy is an excellent bowler these days.  For example, as of last year in March, he had bowled four certified 300 (perfect) games and a total of twelve perfect games overall. He has had a certified 800 series in league play, throwing an 818 series in 2012.

The other completely unrelated but interesting story I found about Auerbach concerned his wedding in 1980 to the former Marlene Moore in suburban Cincinnati.  Their wedding was delayed due to weather -- specifically, a severe thunderstorm that knocked out power to the church at which they were having their ceremony.  The Reverend Daniel Snider (not, not the Redskins owner Daniel Snyder) did the service from memory, and Auerbach left that evening a married man.
Posted by Tony L. at 6:30 PM