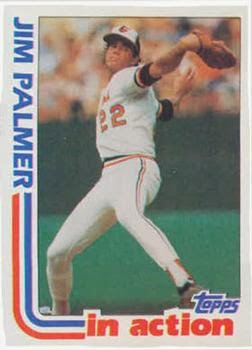 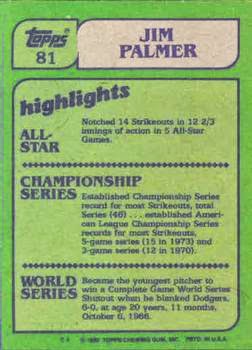 Who Can It Be Now?
It's still Jim Palmer, this time "In Action".  The Action card highlights some of his career achievements in All-Star games, Championship Series, and World Series games and series.

Let's talk, instead, about his baseball cards for a moment.  Actually, one highlight in particular on what is called his "Official Biography" comes on page three of that website.  The first line there states, "In 1994, Jim was part of the Nabisco All-Star Legends, a consumer trading card program which was the largest and most successful in history."

Being that this blog is a baseball card blog and, indeed, I collect baseball cards, that line piqued my interest.  I looked up that card set, and it's quite the set.  A blog called The Card Investor (which has not been updated since 2013) had a post in 2010 about the 1993 set which I found interesting.

The Nabisco All-Star Legends cards were available from Nabisco in both 1993 and again in 1994 simply by sending in two proofs of purchase from Nabisco products and $5.  In return, you received an on-card autograph from one of Brooks Robinson, Catfish Hunter, Don Drysdale, Ernie Banks, Phil Niekro, or Willie Stargell in 1993 or from Bob Gibson, Jim Palmer, Frank Robinson, or Duke Snider in 1994.  Each card came with a certificate of authenticity, and, at least for 1993, the autographs were "limited" to 90,000 cards based on what Nabisco asked the Hall of Famers to sign.

The Card Investor post notes that, midway through his efforts to complete his contract, Don Drysdale passed away suddenly.  That meant that his signed cards carry a premium due to those being limited to 25,000 total.  Catfish Hunter passed away in 1999 and Willie Stargell passed away in 2001, so their certified autographs are very limited in number.  A quick check of eBay on 7/28/2014 shows that these cards generally are not terribly expensive -- just $9.99 for a Jim Palmer, a Phil Niekro for $15.99, and even a Stargell for $26.99 at a BIN price.

If you are a Jim Palmer SuperCollector, the total number of cards that you would need to "complete" your Jim Palmer collection stands currently at 2866 according to The Trading Card Database.  For comparison's sake, that seems to mean that Palmer does not get as much attention from the card companies as guys like Robin Yount (TCDB total: 3753), Paul Molitor (card count: 4463), Bob Gibson (listed at 3301, though probably some mistakes in there) or Tom Seaver (Head Count: 4009) but a lot more attention than Phil Niekro (just 1285) or Robin Roberts (a spartan 687).

I suppose those numbers are a function of the timing for Yount's and Molitor's careers -- picking up a lot more of the parallel-crazy 1990s versus Palmer's mostly 1970s career -- and a function of the fact that there are several other Orioles who simply engender more fan love than Palmer, such as Cal Ripken Jr. (card count: a massive 12,737) or Brooks Robinson (3117).

Freeze-Frame
Palmer's Hollywood good-looks and charm and his broadcasting skills have gotten him many opportunities to appear in documentaries and in acting roles.  His most well-known acting role was playing a broadcaster in one of the funniest movies ever, The Naked Gun: From the Files of Police Squad!  According to his IMDB profile, Palmer has also appeared as himself in a number of series such as Veep, Commander in Chief, George Lopez, The Chuck Woolery Show, and The Pat Sajak Show (though those last two were talk shows and I'm pretty sure Palmer was flogging a book at that point).

Also, as many folks remember, Palmer served as the spokesperson for Jockey brand underwear for many years in the late 1970s and into the 1980s.  He replaced Phil Rizzuto as the on-camera spokesperson for The Money Store after Rizzuto stopped during the spots in the 1990s.  He got in the shower on camera and pitched Tegrin Dandruff Shampoo in 1983. He also pitched Brylcreem for a while.  Finally, as he aged, he picked up a print-ad spokesperson role for Cosamin DS Dietary Supplement for Joint Health...and all of us who remembered him as a pitcher suddenly felt much older.

A Few Minutes with Tony L.
When looking at newspaper articles about Palmer, the thing that tends to come through is that either a bunch of newspaper men are very jealous of Palmer's good looks and money, or else Jim Palmer is an incredibly narcissistic man.  One article written by a woman which appeared in newspapers around the country came out with the title, "From jock to Jockey: 'Hunk' speaks of self".

In that article, Palmer is quoted as describing his personal grooming habits as "fastidious," as preferring water to soda, wine, beer, or liquor, as rarely eating red meat, and as eating fruit for dessert.  The story quotes noted Washington Post columnist Thomas Boswell as writing that "some ballplayers snort coke. Palmer won't even drink one."  So, I guess if we add everything together, we can say that Palmer was a metrosexual even before being a metrosexual was a "thing."

Palmer's personal life comes up frequently in these articles as well.  I've found references to him being married to at least three different women -- his high school sweetheart Susan, whom he divorced in the mid-1980s, a photographer named Joni Pearlstone, whom Palmer married in late 1990 and apparently divorced during that decade, and a second Susan whom Palmer met in Palm Beach in 2000.

No matter what the year, though, Palmer is noted for his charitable work.  For instance, with his most recent wife Susan, Palmer has become involved with autism charities since Susan's son from another father is autistic.  The Palm Beach Daily News article linked above noted that Palmer was involved as a spokesperson for the Cystic Fibrosis Foundation both in Maryland and nationally since 1970.

A few other random notes which don't fit elsewhere:


Finally, did Jim Palmer deserve to be called "the most overrated pitcher in baseball history"? I am not as good at the transposition of players onto different teams as some folks may be.  Certainly, as I mentioned yesterday, Palmer's ERA was always worse than his Fielding-independent-pitching performance -- which would seem to indicate that Palmer was among the luckiest pitchers around.

But overrated? I guess that depends on where you rate him.

To me, he's about an average Hall of Fame pitcher.  That's still really damn good. Most of his comps in similarity scores are in the Hall of Fame as well.  The only three who are not are Mike Mussina and Jack Morris at numbers 5 and 6 respectively and Andy Pettitte at 10.  All four of these pitchers share the fact that they pitched for great teams with good run support and good support in the field and racked up a bunch of wins over many years.  Should those other three guys be in the Hall of Fame? I don't know, honestly.

Looking further, the pitcher to whom Palmer is closest in similarity score is Bob Gibson with a similarity score of 901. Next is Bob Feller, score of 889.  Then, it's Juan Marichal at 874. None of these guys are extremely similar to Palmer -- just similar enough.

I don't think Palmer can be considered overrated as a Hall of Famer.  He's dead smack in the middle there.  The only overrating that happened is the over-90% of the ballots on which Palmer appeared in his election.  But seriously, did anyone watching Palmer pitch in the 1970s ever think, "ah, this guy isn't that good"?

Average Hall of Famer means damn good pitcher to me.  That's all I can say.