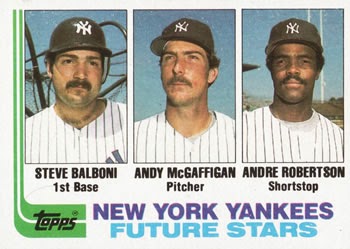 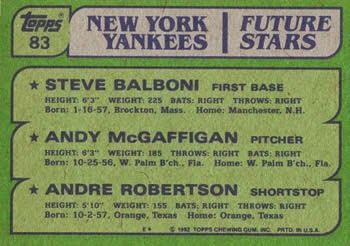 Who Can It Be Now?
The three players on this card all played in the majors, and two of the three had reasonably long and successful careers.  The guy who didn't has a tragic story to explain why.  Here we go.

1.  Stephen Charles Balboni was born in Brockton, Massachusetts, on January 16, 1957.  He grew up a Red Sox fan (with a wicked accent, as the interview in 1980 with former umpire Ron Luciano to which I've linked shows) in New England, and he attended Memorial High School in Manchester, New Hampshire. He was not drafted directly from high school.  As a result, he headed south to Eckerd College in St. Petersburg, Florida.  There, he led the Tritons to the NCAA Division II College World Series in 1977 while being named to the Division II All-American team as a designated hitter.

His hitting exploits led the Yankees to select Balboni with the 52nd pick overall (at the bottom of the 2nd round) in the 1978 June Amateur Draft.  The Yankees assigned him to Fort Lauderdale in the Florida State League, where the expansive ballparks ate Balboni's flyballs alive during his first season.  But, 1979 proved a different story -- Balboni crushed 26 home runs to lead the league by 8 over second place Lloyd Moseby.  Only 7 hitters had double-digit homeruns in the FSL in 1979, so that was some accomplishment.

Despite his minor league hitting, the Yankees just seemed not to like Balboni.  Perhaps it was his prolific strikeout rate, but rather than giving "Bye Bye" a chance in 1982, the team used a combination of John Mayberry, Dave Collins, Lee Mazzilli, Dave Revering, and Butch Hobson instead. Then, in 1983, the Yankees found a guy they liked much better than Balboni -- and can you blame them? -- in Don Mattingly.  So, after the 1983 season, Balboni was traded to the Kansas City Royals with Roger Erickson in exchange for minor leaguer Duane Dewey and Mike Armstrong.

With the Royals, Balboni finally got to play.  He led the team in home runs in its World Series year of 1985 -- leading the league in strikeouts as well with 166.  He stayed there until 1988, when the Royals released him at the end of May.  A couple of days later, he signed with the Mariners.  Then, at the end of spring training in 1989, Balboni was traded back to the Yankees for a minor leaguer, Dana Ridenour.

He stayed in New York through the end of spring training in 1991, when the Yankees released him.  The Rangers then picked him up and parked him at Triple-A Oklahoma City as an insurance policy at DH and 1B for Rafael Palmeiro, Julio Franco, and, to an extent, Jose Canseco and Juan Gonzalez.  With that logjam, it should come as no surprise that Balboni only got a cursory call-up at the end of the 1993 season.  That was the end of his major league career.

Mustache Check: You bet.  Balboni looks like an extra from the Super Mario Brothers game.

2.  Andrew Joseph McGaffigan was born in West Palm Beach, Florida, on October 25, 1956. He grew up in WPB, attending Twin Lake High School, and starred in baseball there.  He was drafted for the first time in the 36th Round of the 1974 Draft by the Cincinnati Reds -- one of just 8 picks in the round -- and did not sign.  As he said in an interview with Royals.Scout.com, the money on offer was nothing to speak of -- $500 a month, no bonus, no guarantees -- so McGaffigan's father urged him to attend college.

So Andy signed on with the local Palm Beach Junior College for a couple of seasons.  Midway through his second year at PBJC, the White Sox drafted McGaffigan in the 5th round of the January Regular Draft.  Once again, because the money on offer was nothing -- pretty much the same as the previous offer -- McGaffigan turned it down to finish his degree.

He moved on from PBJC to Florida Southern College -- the same school that Greg Pryor attended (and both, by the way, are in the Mocs Hall of Fame) -- and had an excellent two years there.  He was a Division II All-American in 1977 and helped lead the team to the Division II College World Series Title in 1978 (wrestling it away from Balboni's Eckerd Tritons!).  So, in 1978 (the same year that Balboni was selected in the 2nd round), McGaffigan was chosen by the Yankees in the 6th Round of the June Draft.

McGaffigan and Balboni were teammates in 1978 in Fort Lauderdale, again in 1980 in Nashville and in 1981 in Columbus. As was the case for Balboni, McGaffigan got a late-season call-up in September of 1981 and pitched reasonably well in middle relief in his two appearances.  Unlike Balboni, however, McGaffigan never played for the Yankees after that.


Once the Brewers were done with him, McGaffigan was done with baseball.

Mustache Check: Yup, Andy's got him a crumb collector.

3.  Andre Levett Robertson was born on October 2, 1957, in Orange, Texas, a small town halfway between Lake Charles, Louisiana, and Beaumont, Texas, in the heart of oil refinery country.  Robertson was drafted directly out of West Orange High School by the Texas Rangers in the 12th Round of the 1976 June Draft but he chose instead to attend the University of Texas on a baseball scholarship.  He played well enough at Texas to be drafted in the 4th Round of the 1979 June Draft by the Toronto Blue Jays, with whom he signed.

For reasons unclear to me -- perhaps the team thought Alfredo Griffin would be their shortstop forever and that Andre would never get by him -- the Blue Jays sold Robertson to the Yankees following the 1979 season.  Robertson moved up the Yankee chain quickly in 1980 -- starting with Fort Lauderdale in the Florida State League and ending in Triple-A Columbus.  Robertson got his 1981 September call-up and played much more than his other two card-mates.  Apparently, by this point in time, the afterglow of Bucky Dent's 1978 homerun had long worn off and the Yankees were looking actively to replace him.  That happened in 1982 when Roy Smalley became a Yankee.

But, things looked bright for Robertson nonetheless.  By 1983, he was getting decent playing time on both sides of second base -- Willie Randolph struggled with injuries that year.  New York Post hyperbole specialist Dick Young -- also known as the guy blamed for running Tom Seaver out of New York -- waxed poetic in June of 1983 about how the Yankees Andre Robertson and and the Mets Jose Oquendo, "are as good as any two shortstops who ever played in the same town at the same time. Maybe better."

Probably not, but Dick had to sell newspapers.

For Robertson, his life was twisted and broken by an event that occurred on August 18, 1983.  His friend from college (and the girlfriend of then-Philadelphia Eagles tight end Lawrence Sampleton), Shenikwa Dawn Nowlin, wanted to do some sightseeing in New York with Robertson. Robertson took a curve on the West Side Highway near 72nd Street too fast, and an improperly placed warning sign did not give him enough time to slow down. The result was that Nowlin ended up paralyzed from the waist down (which, by the way, did not stop her from becoming a lawyer in Dallas).  Robertson ended up with a cracked rib, a broken neck, a separated left shoulder, and a bruised right shoulder.

From that point forward, his career never fully recovered.  Whether it was because he lost his ability -- perhaps not, in light of his hitting his final year with the Yankees -- or whether the Yankees moved on without him, Robertson played only another 102 games in the major leagues.  He kicked around Triple-A with various teams -- the Braves (after being traded there in 1986 with Ken Griffey Sr. for Claudell Washington and Paul Zuvella), the Yankees, the Mariners, the A's, and the Rangers -- through 1989, but he did not make any further big league appearances after 1985.

Mustache Check: Robertson makes it a perfect 3-for-3 on this card.

Trivial Pursuit
Balboni still holds the Kansas City Royals team record for most homeruns in a single season with the 36 he hit in 1985.

Robertson was the first African-American to receive a baseball scholarship to play at the University of Texas when he matriculated there in 1976.

Family Ties
Andre Robertson's brother Roderick Robertson was a third-round draft pick of the Philadelphia Phillies in 1986 out of high school.  Rod played minor league baseball from 1986 through 1995.  He never reached the major leagues despite spending four seasons and 380 games at Triple-A as a decent hitting middle infielder.  Rod did get the opportunity to play every position in 1995 for Rochester, though, including pitcher.

A Few Minutes with Tony L.
These guys never really became established major leaguers with the Yankees, so it's tough to say that Topps was "correct" in calling these three guys "Yankees Future Stars."  Of course, the Yankees only had 5 guys make debuts in 1981 for them -- three of which are on this card -- and Triple-A Columbus was the place that the Yankees stashed their big-league backups. At least all three players played a decent amount in the major leagues.

These days, the three guys on this card have taken paths as varied as their baseball careers. Balboni went into coaching -- first with the Royals and then with the Expos, for whom he managed the Vermont Expos in 2001.  After that, he was a hitting coach for the St. Louis Cardinals in the minor leagues.  Later on, Balboni caught on first with the Yankees and later with the Giants as a scout.

Andy McGaffigan worked in the nonprofit sector during the 1990s putting together golf tournaments as fundraising events for charity.  Then, in 2001, he started work with Northwestern Mutual Life Insurance Company in retirement planning in Lakeland, Florida.

After Robertson left baseball, he went back home to Orange, Texas, and did what most folks in a small, blue-collar town do -- he went to the local plant and got a job.  In his case, he started working on "Chemical Row" in DuPont's Sabine River Works.  It's the same plant in which his father worked for 38 years as a mechanic after his father was done playing football at Tennessee State University in Nashville.  Robertson's children went the academic route rather than the athletic route, with his son Ryan being the first-ever African-American valedictorian in his high school's history.

From recent interviews and stories about each man, all of them seem happy and, more importantly, fulfilled with how their lives worked out.  None of these guys were ever "stars" as Topps predicted (perhaps Balboni got close), but, just as importantly, all of these guys have contributed to their communities in their own ways.